1. The World’s Largest RT Programme WTM, London November 5-7
This year we have 23 sessions and 67 speakers, the world’s largest Responsible Tourism event. All the speakers are leaders in Responsible Tourism ready to share their knowledge and experience and to answer your questions. We have sessions on water, plastics and wildlife and animal welfare. Social and Economic responsibility are high on our agenda with an important session on Child Protection, empowering African women entrepreneurs and Inclusive Tourism countering Disadvantage & Disability. Economic responsibility is featured in a session on creating shared value, employment and decent work and both feature in the session on indigenous tourism. The business case for taking responsibility features across all the panels including Responsible Tourism in China and the session on storytelling and communicating Responsible Tourism with is a strong link to the growing demand for experiences. Flanders has just published a stimulating report on how they are using experiential tourism in their marketing and they are on the panel. For the first time, we have a session on Business Taking Responsibility for Security, Health and Safety and Tourism Investing in Africa’s Future: The Gambia and Uganda. We have a diverse panel discussion on partnerships for change  How can we best work together to realise the ambition of sustainability and using tourism to make better places for people to live in?

The programme of Responsible Tourism events is available online and there is a two page printed version ideal to bring to the show.

2.  Responsible Tourism Awards: World and Africa
The World Responsible Tourism Awards will be presented at WTM London on Wednesday 7th November. There are 18 finalists this year – all of them Leaders in Responsible Tourism. The Gold, Silver and ones-to-be-watched will be announced along with the coveted Overall Winner Award. Full details of the Awards and the judges’ reasons will be published online at 13:00 –link
This year Africa Responsible Tourism Awards are encouraging nominations from the public, businesses and other organisations can still enter directly. The six categories open for nominations and entries are Best for Resource Management in Water or Waste, Best Sustainable Event, Best for Habitat and/or Species Conservation, Best for Community Benefit, Best Responsible Experience in Culture or Heritage and Best Responsible Attraction. Entrants are automatically entered into a seventh category – the Best for Global Goals Reporting – recognising the role of tourism in contributing to the UN’s Sustainable Development Goals. link

This was the headline on a report in The Economist and that word backlash again. The spread of social media has concentrated rather than spread tourists, the “selfie” needs to be taken in a well-recognised place of status and the proportion of travellers making their first trip has soared, the impact of the budget carriers and the democratisation of travel. In The Economist the overtourism story is juxtaposed with one about the porters who have to carry the tourist faeces an hour down Everest to Gorakshep where it is dumped into pits, the pits are filling fast and run-off threatening the water supply and health.  Conde Nast Traveler has carried a story suggesting that  Venice’s city council’s “draconian measures” to address overtourism are hitting hotel bookings. FarandWide has carried a feature on ” Overhyped, Overrated Tourist Traps to Avoid at All Costs”.

In Wales, a Gwynedd-based Welsh language pressure group, have written to all 75 Gwynedd councillors detailing their concerns and calling for a tourism policy which protects the character of local communities and the Welsh language protesting that the tourism industry in Gwynedd is out of control. The Thai government has Maya Bay to the public – acknowledging that long-term preservation outweighs the short-term losses of revenue. The New York Times carried a story about how when South Koreans search Lonon on social media the East Sussex cliffs, known as the Seven Sisters, some two hours drive from London, come up first! The Japanese government has launched its first survey on overtourism. In The Observer Cambridge is reported to be divided businesses welcome the economic boost but congestion on the streets is frustrating residents. Jing Travel also covered the story from a Chinese perspective.

4.  UNWTO Report on Inclusive Tourism Published
This is ambitious. “If well planned and managed, inclusive tourism has the capacity to help to bridge the gaps that exist in our global, connected society and ultimately contribute to minimizing social divides worldwide…. tourism contributes to several of the Sustainable Development Goals of the United Nations, on gender equality, reduced inequalities, inclusive and sustainable economic growth, and decent work for all. ,,, the tourism sector has expanded to reach into many communities in fast-growing and established economies alike. So by creating inclusive tourism destinations, projects and activities in line with responsible tourism principles, we can enable all people to feel included in society and we can bring the widest possible range of socioeconomic benefits to tourists and locals. By extension, more inclusive tourism will better unlock tourism’s power to unite people across diverse cultures in a spirit of tolerance, respect and discovery.” Zurab Pololikashvili, Secretary-General, World Tourism Organization (UNWTO) Report

5. Workers are on strike at 23 hotels operated by Marriott
Housekeepers, cooks, servers, dishwashers, bartenders, doormen, bellmen and concierges are part of a nationwide strike by 7,700 workers

On the walking picket lines, employees are demanding better wages, workplace safety, and a seat at the table for technology changes in the latest strike organized among America’s low-wage workers. Unite Here, is calling this “the largest multi-city hotel strike in North American history” “Although demands vary slightly between striking properties, the workers are striking under the slogan “One job should be enough,” a corollary to the Fight for $15 Movement spanning the service industry and demanding living wages in a rapidly changing economy. Activists say incomes have lagged far behind inflation and cost of living, and many complain they must often work two or three full-time jobs to afford basic necessities.” more

6.  ABTA has launched new guidelines for their members on modern slavery
Forced labour is one of the main ways that those in the travel and tourism industry might find themselves, potentially unwittingly, complicit in modern slavery. Risks include the common practice of people being charged recruitment fees to secure employment and ending up in debt bondage, people being employed through an agency or other outsourced working arrangement and being exploited, travel and tourism facilities, flights or hotels, being used for exploitation or trafficking, and encouraging child trafficking associated with orphanages through adding to the economic incentive. link

EasyJet has pledged to develop a fleet of electric planes to cover short-haul routes by 2030, which would effectively reduce carbon emissions and noise from its operations. Easyjet is beginning to develop electric “flyways,” as easyJet refers to them — such as London to Amsterdam. Johan Lundgren speaking st Schipol airport said: “From the two-seater aircraft, which is already flying, to the nine-seater, which will fly next year, electric flying is becoming a reality and we can now foresee a future that is not exclusively dependent on jet fuel.” Wright Electric predicts electric planes will be up to 50% quieter and 10% cheaper than traditional aircraft for airlines to buy and operate. 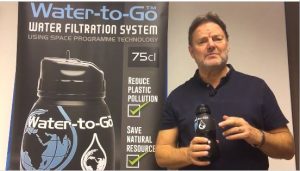 Water-to-Go has a patented filtration system used in their 3-in-1 filters based on technology originally developed for the NASA space programme. Their technology eliminates over 99.9% of all Bacteria, Viruses, Chlorine and Fluoride and Heavy Metals such as Lead and other contaminants such as pesticides providing safe drinking water from any water source (except salt water). The will be at WTM on Stand AF195

Recycling Technologies has engineered a modular and scalable machine – the RT7000 – to chemically convert plastic waste, which currently cannot be recycled, into Plaxx® – a valuable hydrocarbon product. The machine is sized to be installed at existing waste sites and recycling centres, diverting residual plastic waste from ending up landfilled, incinerated or exported overseas. They plan to build 1300 RT7000 machines in the next decade, to underpin our mission of producing 7 million tonnes of Plaxx® by 2027. In doing so, we will add 10 million tonnes of recycling capacity.

Television for the Environment has produced a series of film s designed to raise awareness of how we can adopt ocean-friendly behaviours of an EU project calledResponSeable.

10. UNWTO developing statistics to Measure the Sustainability of Tourism (MST)
Work in progress: pilots studies have been completed in Germany, the Philippines and Saudi Arabia, the working group has tasked itself with refining and documenting three statistically-based tourism indicators to monitor the Sustainable Development Goals (SDGs) and their targets. The next step is to present this draft framework in UNWTO’s 2019 meetings of its governing bodies.

Harold On The Web