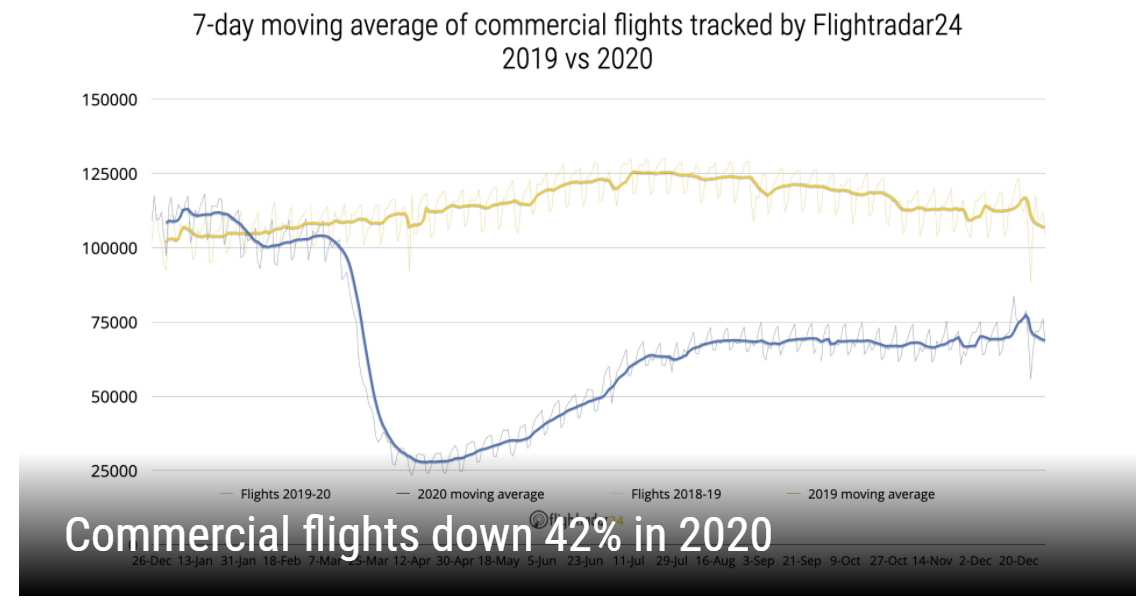 2020 09 29 "The industry believes that with the right support from governments, net-zero CO2 emissions from global air transport may be achievable by around 2060-2065, but it is likely that some regions will be able to meet this goal earlier with work underway in some parts of the world to identify those roadmaps. A number of individual airlines and companies in the industry have already set themselves net-zero targets." "The Waypoint 2050 analysis does not rely primarily on market-based measures such as offsets to pursue pathways to decarbonisation. However, it is likely market-based measures will be needed in the long term to deal with any remaining CO2 emissions or as sustainable aviation fuels ramp-up."  Air  Download Waypoint 2050 report

2020 08 02  Coronavirus: How the travel downturn is sending jet planes to 'boneyards'
Aviation experts say the pandemic has forced more planes to these "boneyards" than any development in recent history. Long haul airplanes are also being prematurely retired. Last week British Airways, the world's largest operator of the jumbo jets, announced it would retire all of its 31 Boeing 747s, 10% of its total fleet, ahead of a planned phasing out in 2024. In April, more than 14,000 passenger aircraft - equivalent to two-thirds of the global fleet - were grounded around the world, up from less than 1,900 planes at the beginning of the year, according to Cirium, a London-based aviation data and analytics company. more

2020 07 18 Middle Seats. The FT reports that to break even on a flight, airlines need to sell about 75% of capacity, that's 8% higher than a plane with every third seat unoccupied and even then passengers are not 2 m apart.  American Airlines and United are selling the middle seats. Credit Suisse analyst Joe Caiado said in a note "Heretofore, the one sacrosanct rule in the cut-throat world of commercial aviation has always been that airliners never compete on safety."

2020 07 14 YouGov polled Adults in GB between 2 - 3 July and found that while 45% expect to travel in the UK in the next six months. Nearly two-thirds of the public (64%) would not feel safe travelling by plane currently, up from 40% on 8 June. There is a similar unease about other types of international transport. Over half of Brits (55%) say they’d feel unsafe travelling by train. Only 12% of those over 65 are considering travelling abroad,  75% say they feel uneasy about flying, an increase from 47% on June 8th. more

The aviation industry is our sector’s Achilles’ heel

There are challenges in all sectors of travel and tourism but the elephant in the room is aviation. Airlines emit 80% of our industry’s greenhouse gasses and air travel is growing at 5% per year. As other industries reduce their carbon emissions aviation will account for ever-larger shares of global emissions. More

Responsible Travel launched the first chapter of their manifesto for change in the tourism industry, The Fork in the Road. They are in the industry, concerned about its future and like all of us in the Responsible Tourism movement convinced that it can be fixed. But it needs to be fixed, we need to take action – business, as usual, is not good enough.

Aviation fuel is untaxed, the polluter pays principle has not been effectively applied to the airline industry. When consumers pay a carbon offset, the airlines and manufacturers evade their responsibility.

The International Civil Aviation Organisation has successfully relied on the 1944 Chicago Convention to avoid taxation and to maintain business as usual. It has taken them almost 20 years to develop CORSIA (Carbon Offsetting and Reduction Scheme for International Aviation) and that will not apply to domestic aviation.

As Responsible Travel’s Aviation and Climate Change manifesto chapter makes clear carbon offsetting cannot achieve the change needed. In 2017 a European Commission funded research project found that 85% of offset projects under the Kyoto Protocol’s Clean Development Mechanism (CDM) – some of the most highly regarded offset schemes in the world – failed to reduce emissions. From 2021 the EU will stop allowing offsets to be counted towards emissions targets, except for aviation.

Those who feel a degree of guilt about flying are encouraged to buy carbon offsets, imagine if when we filled our tanks at the service station we were asked to buy offsets. Would we?

Consumers are increasingly demanding that producers and suppliers address the sustainability of the goods and services offered to us to purchase  – the same pressure needs to come on the manufacturers of aeroplanes and providers of flights. The aviation industry is our sector’s Achilles’ heel.

In the motor industry, there has been rapid progress in developing more carbon-efficient engines and in reducing emissions. Similar pressure needs to be placed on airlines and aeroplane manufacturers. The planes being brought into service now are expected to be flying in 30 years’ time, for sure the regulatory framework will be very different by then.

Aviation’s carbon footprint would fall by 11%, or some 16.4 million tonnes of emissions, if the EU were to scrap jet fuel’s tax derogation, according to a leaked European Commission study. Imposing a tax of €330 per thousand litres of kerosene could help address global warming, reduce noise pollution and raise €27 billion in revenues every year, a new study compiled by Dutch consultants CE Delft for the EU executive has revealed. The report, leaked to the press on Monday (13 May), found that ticket prices would increase by an average of 10% and aviation sector jobs would be cut by 11%, as a result.