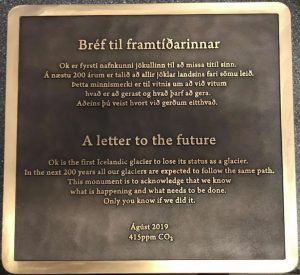 Memorial to a lost glacier in Iceland

RTD 15 in Northern Ireland postponed to 2020

Scientists have declared that heatwaves are 'at least' five times more likely due to warming and that current heatwaves are hotter than the climate change models are forecasting. More  The scientists report that the speed and extent of current global warming exceeds any similar event in the past 2,000 years. "This paper should finally stop climate change deniers claiming that the recent observed coherent global warming is part of a natural climate cycle," said Prof Mark Maslin, from University College London, UK, who wasn't part of the studies. More
In the UK the 10 warmest years have all occurred since 2002. Faversham, my home town, has held the record for the highest temperature (38.5C 2003) until this year when Cambridge recorded 38.7C. More  The former Okjökull glacier, which a century ago covered 15 sq km (5.8 sq miles) of a mountainside in western Iceland and measured 50 metres thick, has shrunk to barely 1 sq km of ice less than 15 metres deep and lost its status as a glacier. Our species has given it a commemorative plaque. More  Global warming is happening faster than the models predict. One, or part, of the reasons, will be that the feared feedback loops are playing a role earlier and larger than expected. Wildfires are ravaging the Arctic, with areas of northern Siberia, northern Scandinavia, Alaska and Greenland engulfed in flames. The fires are releasing copious volumes of previously stored carbon dioxide and methane - greenhouse gas stocks that have in some cases been held in the ground for thousands of years. More

6. Airbnb
The ambition of Fairbnb is "to give the sovereignty of tourism back to local communities," they are building an alternative. Fairbnb is planning to launch in September in the pilot cities of Venice, Bologna, Genoa, Barcelona, Amsterdam and Valencia; Genova, Helsinki and London will come next.  In London, a council tenant who sublet his flat through Airbnb has been evicted and fined a record £100,000. The is a useful summary of action being taken to regulate disintermediated sales of accommodation in Amsterdam, Balearic Islands, Barcelona, Berlin, Japan, New York, Paris, San Francisco, Santa Monica and Sydney in the Daily Telegraph  The tide may be turning as the regulators catch up.  New privately-owned homes in Brunswick in Manchester will be covered by strict covenants preventing them from being used primarily for short-term lettings for tourists or for students as Houses of Multiple Occupation. The homes are being sold only to local people and ""If a home is sold in the future, the covenant carries over to the next owner continuing to protect the community from the investor market." 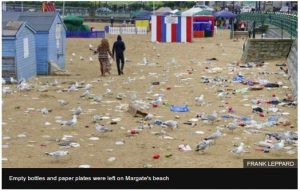 Margate beach covered in 'heartbreaking' amount of litter. Local residents left to fund the clean up after visitors trashed the beach. More on BBC site.  A Californian business Restoration Packaging has developed a coffee cup which is biodegradable and contains seeds in its wall, it can be planted and grown. Their website has the punchy url planttrash.com

In Kerala, the new classification system for houseboats developed by the Responsible Tourism Mission includes "Waste management measures, paper bags, cloth and eco-friendly materials, and code of conduct for guests, staff, and disabled-friendly features such as ramps, toilets, and Braille materials for the visually challenged are must on boats."  The RT Mission in Kerala has also agreed with industry stakeholders a Green Code of Conduct action plan in nine major tourist destinations and accommodation units in the state.

8. Child Protection
This year at WTM London, Martin Punaks, previously of Next Generation Nepal and latterly of Lumos, is moderating a panel presenting solutions to post orphanage tourism. It is now widely accepted that organising volunteering in orphanages or visits to them is undesirable and could involve the exploitation of trafficked children, risking modern slavery offences. At WTM we shall be exploring the alternatives. There is increasing awareness of the damage done to the victims of paedophiles with more treatment of these in popular media. More

9. Accessible Tourism
Accessible tourism matters for everyone, not just the wealthy. "ResponsibleTravel have just published the second chapter of their manifesto for the future of travel, pointing out that equal access to travel and tourism is a myth. “On average, adults with a disability,  travel just over half the distance per person per year travelled by adults without a disability. Families with children with access requirements feel unable to take a holiday together.” It does not have to be like this." More

10. UK Government Policy
The UK government's  (DCMS) has published a Tourism Sector strategy, there is nothing on sustainability. The Commons environmental audit committee has launched an inquiry into the environmental cost of tourism and transport will consider whether the UK government should play a greater role in offsetting the waste and damage caused by the tens of millions of Britons who go on holiday overseas each year.