The concept of shared value emerges from the writing of Harvard Professor Michael E. Porter[1] – well-known for his previous work on competition strategy, value chains and cluster theory.

Porter defines shared value as “policies and operating practices that enhance the competitiveness of a company while simultaneously advancing the social and economic conditions in the communities in which it operates.” (Porter & Kramer 2011: 2) The focus is on identifying and expanding the links between economic and social progress. He argues that companies have an outdated perspective on value creation, most "companies tend to overlook the wellbeing of their customers; the depletion of natural resources vital to business; the viability of key suppliers and “the economic distress of the communities in which they produce and sell.”

Instead, Porter argues, companies must bring business and society back together through redefining their purpose as being to create “shared value”. In other words, economic value can be generated in such a way that it also addresses the needs and challenges of society and generates value for that society. Porter’s argument is that this will “reconnect company success with social progress”.

It’s important to appreciate the difference between the concept of shared value and other approaches – it is not social responsibility, philanthropy or sustainability. Rather, it is “a new way to achieve economic success” through encouraging businesses to act as businesses rather than “charitable donors”.

According to Porter, the rationale for shared value is that a business “needs a successful community, not only to create demand for its products, but also to provide critical public assets in a supportive environment.” By turning away from an outdated, restrictive view of capitalism and a company being a “self-contained entity” to a position where instead “societal needs define markets”, he argues that both economic and social value can be expanded and “a bigger pie of revenue and profits” created. This creates competitive advantage by defining value as benefits relative to costs, not just benefits alone.”

Tourism businesses and attractions are particularly dependent on the communities in which they operate, communities can withdraw license to operate and make operating a tourism business very difficult. But more important most tourism businesses require a rich menu of local experiences to attract visitors and that generally requires the engagement of people from the local community willing to engage with the guests and share their natural and cultural environment.

Community-based tourism (CBT) has proved a popular and resilient idea, a “good thing,” this despite its lack of success in delivering community benefits. Tourism is 10% of global GDP, a major sector of consumption, there must surely be potential to create decent livelihoods and “shared value” for local communities from it. A local community which engages with tourism is effectively exporting, making sales beyond it immediate boundaries, often internationally, and the consumer comes to the producer bearing their own travel costs. Tourism brings additional economic demand often to remote and marginal areas.

CBT is best defined as “tourism owned and /or managed by communities and intended to deliver wider community benefits.”[2] Developing a business in a community on a sufficient scale to benefit the whole community is challenging and very few initiatives are successful, the failure rate is high. The work of the Pro-Poor Tourism Partnership identified the ways in which tourism could be used locally to benefit the economically poor and there were a few successful initiatives, but there are very few examples where the benefits can be quantified.[3]

Transfrontier Parks Destinations (TFPD) and Village Ways are two examples of commercial businesses with strong social values both evidencing the creation of shared values and the business and social benefits which result from developing community-based tourism enterprises and enabling them to reach national and international markets.

At WTM London in 2016 there were three "conversations" on the Responsible Tourism stand on the show floor discussing hnow best to enhance the host and guest experience, in India and in Africa,  so as to make a better place for people to live in and to visit.  The session on guides and their role as cultural brokers also stimulated ideas about how to improve the host-guest relationship.  Armstrong and Goodwin produced a note of the main ideas which came from these three sessions. Download. 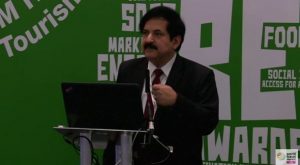