1. World Responsible Tourism Awards
The 2018 World Awards, now organised by WTM London, were launched on Earth Day ib Dubai. The Awards are now open and submissions can be made until 6th August - the judges can only choose form amongst those that that. Details and application forms. 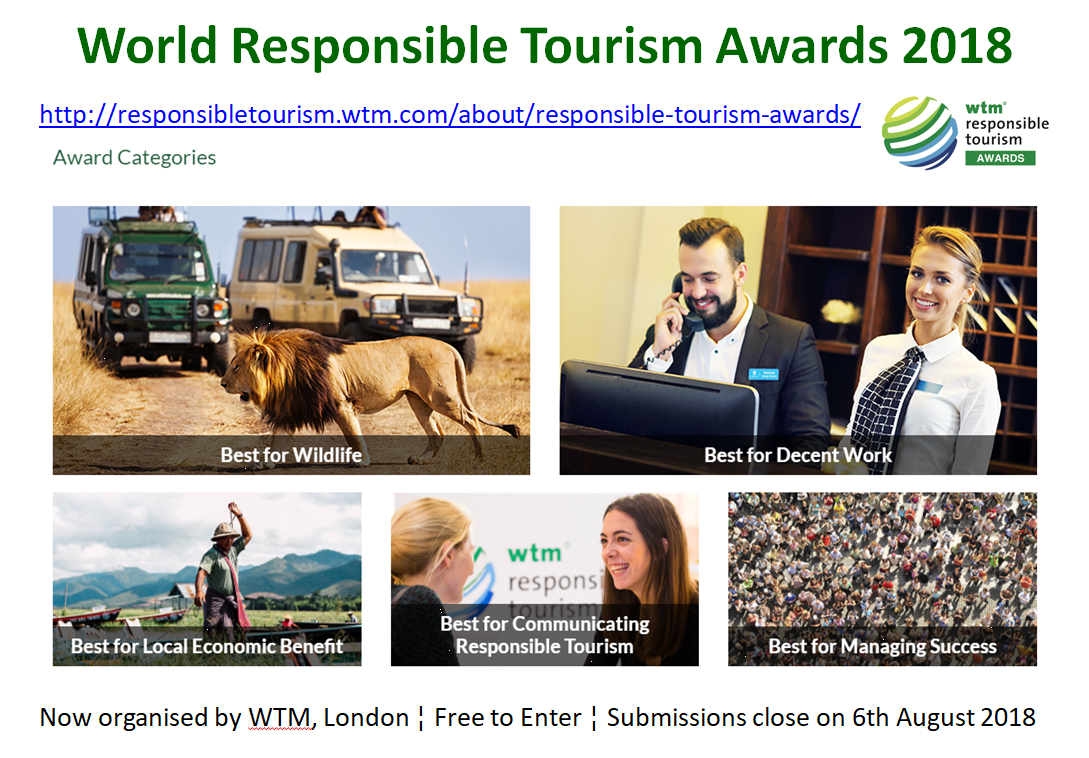 2. Corporates acknowledging that they need to take responsibility
Responsible Tourism is becoming mainstream. senior figures in the industry are following TUI’s example and recognising their responsibility for ensuring that the sector is sustainable – it is in their enlightened self-interest, but it has taken a while for them to realise that the problems cannot be left to others to address. Carnival Corporation chief executive Arnold Donald has said that Travel industry leaders should “listen very carefully” to complaints of ‘over-tourism’ by local communities, acknowledging that Venice is “overrun” and that “a bit of regulation” would help. Gavin Tollman, chief executive officer of Trafalgar Tours,  “Each and every one of us has a duty to preserve destinations for future generations. As an executive in the travel industry, I firmly believe this awareness needs to be a basic component in how we run our businesses.” He went on to emphasise the importance of attracting the right type of tourists – people who understand, embrace and appreciate the places they visit, not those who travel to tick items off their bucket lists. He  argues that “Tourism needs to add to the economic long-term sustainability of the places we visit, it cannot simply be a drain on resource and local infrastructure with limited or no local contribution. More

3. Overtourism
It is the failure to take responsibility for sustainability that has resulted in the overtourism crisis. This month neighbourhood associations and activist groups from 14 southern European cities formed a network to join forces in their fight against mass tourism. Venice segregated visitors and locals to cope with the "assault of tourism".  Venice installed turnstiles and  The Daily Express in the UK asked "Is it safe to visit Venice amid anti-tourist street protests?" In Halong Bay a forum has been convened to address the challenge. Justin Francis of Responsible Travel has suggested ways in which travel agents can help their clients to avoid the problem.

Shipping generates roughly the same quantity of greenhouse gas as Germany if it were accounted for as a nation, it would be the world's sixth biggest emitter.The Marshall Islands have the second largest number of registered. Like aviation it was omitted from  the Kyoto Protocol and the Paris Agreement.  David Paul, their environment minister, argued at the International Maritime Organisation, that he economic gains of protecting shipping would be "far outweighed" by the costs of failing to achieve the limits in temperature rise set out in the Paris Agreement. The IMO agreement is for a target for a 50%  reduction in emissions by 2050 compared to 2008 levels. The EU has launched a new satellite tasked with tracking dirty air, it has demonstrated how it will become a powerful tool to monitor emissions from shipping - including cruise liners. Meanwhile plans to grow large quantities of bio-fuels for aviation are being criticised for their large negative impacts on the environment and on food supply.

5. Consumers are demanding that businesses take responsibility
Recent research published by TUI clearly shows that consumers expect the industry to take responsibility for ensuring that their product is sustainable. Research by booking.com found that 87% of global travellers say they want to travel sustainably, and nearly four in 10 (39%) say they often or always manage to do so. However, 48% said that they never, rarely or only sometimes manage to travel sustainably. As booking.com points out, this suggests “that while promising strides are being made for a greener future, there is still plenty of room to turn intentions into action.” Sustainability is the aspiration; this consumer aspiration is a commercial opportunity.

The India Responsible Tourism Awards - the winner and the judges' reasons. 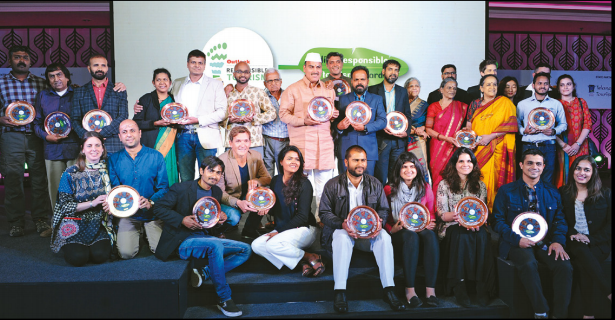 The Africa Responsible Tourism Awards: Overall Winner Wilderness Safaris and all the others  the judges' reasons.

7. The regulators are catching up with platforms like Arbnb
Research by “Am Isterdam: Contested Spaces: Tourism versus Livability” into the  tensions which arise as mass tourism is rapidly becoming a contested issue, with residents and local neighbourhood associations frantically waving the ‘red flag'.The research asks, how have residents been experiencing and perceiving mass tourism in Amsterdam and how are they addressing it? Amisterdam.

In Paris the city authorities are taking legal action against Airbnb (with 50,000 listings)  and two of its smaller competitors for allegedly failing to obey laws designed to limit the profusion of holiday rentals – and are seeking up to €43m a day in damages.  Last year, the authorities required that each rental have a unique registration number, to enable officials to enforce a law that prevents owners from letting to tourists for more than 120 nights a year. Paris says Airbnb is openly flouting this law, and wants damages of €1,000 a day for each of the 43,000 listings it claims are not properly registered.

8.  Plastic Pollution
A British diver has filmed a sea of rubbish off Bali. The video is shocking. A giant plastic 'berg has blocked an Indonesian river 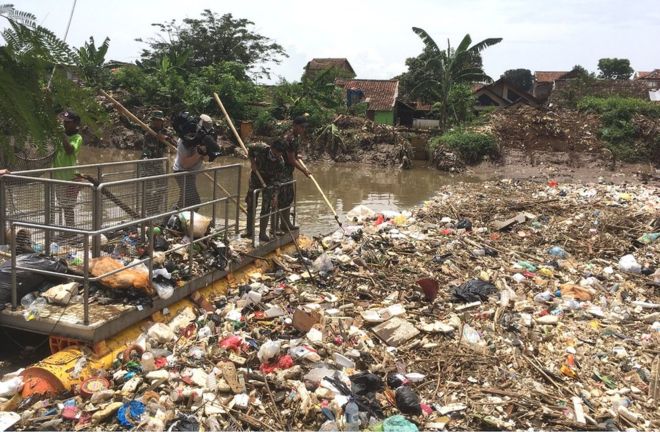 Like other developing countries, Indonesia is wrestling with an acute plastic waste problem photo David Shukman

Britain may introduce a deposit scheme on plastic bottles. UK consumers use around 13 billion plastic drinks bottles a year of which more than three billion are not recycled..

One of the reasons that we travel is to experience other cultures, to encounter "the other", to understand and to share something of the other vicariously and briefly. Sometimes this is voyeuristic and exploitative. This resource page has been created to enable those who facilitate responsibly encounters with the other, whether for local, domestic or international visitors. Encountering the other

10. Messi new UNWTO Responsible Tourism Ambassador
The has been muttering of disapproval about Barcelona footballer Lionel Messi being appointed Ambassador for Responsible Tourism by the World Tourism Organisation. But as Justin Francis argues "perhaps it is hypocritical of us, then, to demand “perfect” representatives to promote responsible tourism. It is also incredibly counterproductive. Messi has unbelievable influence and reach, and his enthusiasm for promoting our cause can only help spread the message." more

You are receiving this email because you have been receiving RT News for some years or have subscribed online more recently. Your name and email address is kept securely by our agent and used only to send you a copy of RT News. We will never sell or give your mailing address to any other organisation. Every edition of RT News sent by email comes with an unsubscribe function so if at nay time you wish to cease receiving RT News please unsubscribe. Our mailing list contains only your name and email address.