2. Africa Responsible Tourism Awards 2017
3. Was this the world's strangest tourist attraction?
4. Experiencing temporary localhood in Copenhagen
5. PEUAT: Barcelona is regulating all forms of tourism accommodation in the city
6. Sustainability matters to consumers in developed and emerging markets
7. Urgent need for applied research for sustainable accommodation
8. Trump's Impact on Travel & Tourism
9. The sacred and the profane clash in Cornwall
10. Paul Miedema

1. RT at WTM Latin America 4th-6th April Sao Paulo
2017 is the UN’s International Year of Sustainable Development through Tourism, the spotlight is going to be shone on the industry’s contribution to sustainable development in destinations at WTM Latin America, WTM Africa, and Arabian Travel Market, and in November we shall be reviewing progress in 2017. At WTM Latin America there are three sessions on RT: Tourism and the SDGs; RT Examples from South America and Wildlife, Biodiversity and Animal Welfare. The full programme is online here.

2. Africa Responsible Tourism Awards 2017
The 2017 African Responsible Tourism Awards will be presented at a ceremony hosted as part of the World Travel Market Africa, on 20 April 2017. The African Responsible Tourism Awards rest on a simple principle – that all types of tourism, from niche to mainstream, can and should be organised in a way that preserves, respects and benefits destinations and local people. This year, there are 36 tourism organisations from Mozambique, Kenya, Tanzania, Zimbabwe, Ethiopia, South Africa, Botswana and Namibia on the longlist, in seven categories, among them habitat and species conservation, engaging people and culture, poverty reduction and a new category in 2017 - the best responsible event. The longlist is available here from noon on March 1st.

3. Was this the world's strangest tourist attraction
When Thomas McFadden was caught smuggling cocaine in La Paz airport in 1996 he was jailed in a place more like a warped small town than a prison. Prisoners were expected to earn a living inside and buy their cells as if they were real estate. There was a primary school for the prisoners' children, who they brought to live with them, and in the most notorious twist of all, there was an in-house cocaine factory. San Pedro Prison became a tourist attraction, Thomas provided guided tours and backpackers stayed for weeks and partied with inmates. More

4. The locals are the destination in Copenhagen
“We welcome the arrival of today’s traveller: the temporary local seeking not the perfect still picture to take home, but the emotional connection to an instantly shared experience based on interests, relations and authenticity.”  “The DMO’s role is shifting towards developing and spotlighting the right kind of experiences and engaging the right people at the right time to tell the right stories about the destination based on a shared strategic branding framework.” The End of Tourism as we Know It is a clever spoof and thought provoking – it’s worth reading. More

5.  PEUAT: Barcelona is regulating all forms of tourism accommodation in the city
The Special Tourist Accommodation Plan (PEUAT) regulates the introduction of tourist accommodation establishments, as well as youth hostels, collective residences with temporary accommodation and tourist apartments. These new regulations are in response to the need to make tourist accommodation compatible with a sustainable urban model based on guaranteeing fundamental rights and improving the quality of life for city residents. More

6. Sustainability matters to consumers in developed and emerging markets
Unilever surveyed 20,000 consumers from the United Kingdom, Brazil, Turkey, the United States and India, about their sustaina¬bility concerns and how they impact their choices in-store and at home. “21% of the people surveyed said they would actively choose brands if they made sustainability credentials clearer on packaging and marketing”. “The trend for purpose-led purchasing is greater in emerging economies.53% in the UK and 78% in the US said they would feel better about buying products that are sustainably produced, while Brazil and Turkey were at 85% and India was at 88%. India, Brazil and Turkey, which fall into the emerging markets category, perhaps feel stronger about sustainability due to direct exposure of unsustainable business practices, such as water and energy shortages as well as food poverty and poor air quality. While countries such as the US and the UK feel more pressure from social scrutiny.”  More

7.  Urgent need for applied research for sustainable accommodation
The challenge of reducing water and energy consumption across the full range of tourist accommodation is well known, what is needed now is action research - we need to know what works and to begin to apply the knowledge. Take a look at this initiative originating in the ICRT Australia.

8. Trump's Impact on Travel & Tourism
The World Travel & Tourism Council (WTTC) called President Trump’s 90-day ban “wrong” and “misguided” and urged the US administration “to reconsider”. The UNWTO expressed “deep concern and strong condemnation”, while the Pacific Asia Travel Association said it “fundamentally opposed any form of blanket travel ban” based on nationality. UNWTO secretary-general Taleb Rifai said: “The travel ban…is contrary to the principles of freedom of travel. Blind discriminatory actions will not lead to increased security but to growing tensions and threats.” More

A study by Montreal-based Hopper found a broad decline in flight searches, a leading indicator for bookings, with demand falling in 94 out of 122 countries of origin. Search demand from the seven predominantly Muslim countries included in the travel ban — Iran, Iraq, Libya, Somalia, Sudan, Syria and Yemen — was down 33 percent, but China, Ireland, Denmark and New Zealand all saw comparable declines. However, , flight searches from Russia to the U.S. have skyrocketed, up 88 percent under Trump's travel ban. More

9. The sacred and the profane clash in Cornwall
There was a mining disaster at the Levant Mine in 1919 when 31 men died. The mine has featured in the Poldark series and visitor numbers have increased by 50% to 100,000 per year. Public feeling is running high locally. Ian Cooke, a local campaigner, told the BBC "We don't want Levant Mine to be treated as a Poldark attraction." Facebook page.

10. Paul Miedema
Paul was a leading light in Responsible Tourism in South Africa - we should honour his memory by redoubling our efforts. 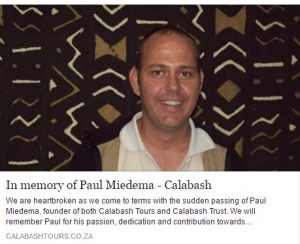 There are many tributes to Paul on his Facebook page
You can donate to the work od the Calabash Trust in memory of Paul.