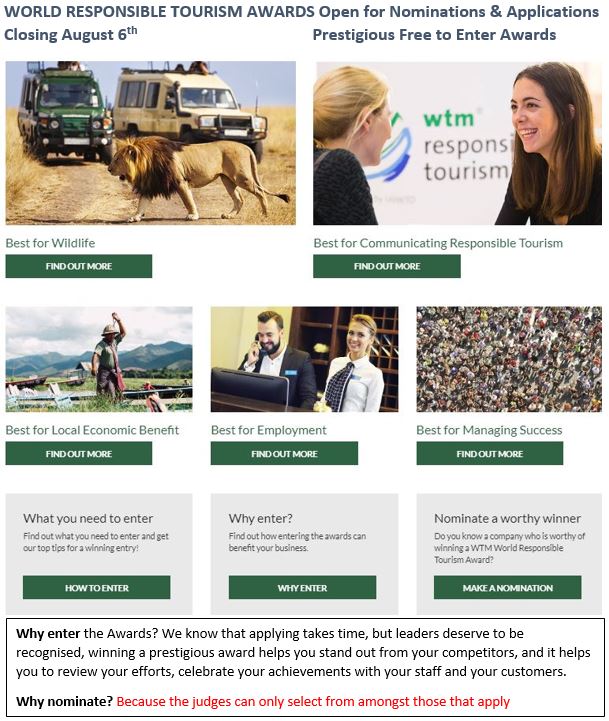 1. World Responsible Tourism Awards - one month to deadline August 6th
There are five categories and an overall winner. They are free to enter. The judges can only select from amongst those that enter.

To nominate or enter go to www.wtmresponsibletourism.com/en/about/responsible-tourism-awards/

2. CROWDED OUT: AN OVERTOURISM DOCUMENTARY
This is an important film about how and why tourism,  written and produced by activist travel company Responsible Travel and narrated by Justin Francis. The Wall Street Journal described tourism as currently "generating a global backlash". More

In the World Responsible Tourism Awards, we are looking for destinations which are beginning successfully to manage success. Apply or nominate the place and people who are beginning to manage tourism to use rather than be used by tourism, to harness tourism rather than to be abused by it. Nominate or Enter Here

Can we stop Loving them to Death?: From 16-18 September 2018, The University of Plymouth is hosting a small research-oriented conference bringing together those involved in managing tourism in national parks and protected areas, conservationists, tourism businesses, guides and researchers to discuss the management and conservation challenges and the research needs Loving them to death? Published in 1993. The report was a siren call for the dangers posed to wildlife and habitat in Europe’s national parks and protected areas. The challenges were great then, they are larger now: over tourism, plastic pollution, declining habitat quality, loss of species diversity, the growth of the cruise industry and the recreational use of sea and land. This free conference is an opportunity with other professionals to do some thinking and make some new connections – we need to up our game.  There are still opportunities for speakers and posters. For further details and booking information link

4. TUI's latest sustainability report published
Back in March TUI became the world's leading provider of services and leisure activities in holiday destinations. In June the TUI Group released its sustainability report. Half-way through their Better Holidays, Better World strategy, they are reporting against their targets on hotels, airline, cruise and they have raised €7.3m in one calendar year to support good causes and enhance the positive impacts of tourism, using the TUI Care Foundation.

5. Orphanages and Modern Slavery
As we reported last month TUI has included orphanages in its Group Anti-Slavery Statement they acknowledge that “Active recruitment of children into orphanages for the purpose of profiting through foreign aid and volunteerism is a form of child trafficking and modern slavery.” “In response to a campaign to counter child trafficking in orphanages”, TUI has acted to ensure that no orphanages are offered in TUI excursions. In the US there is a #FamiliesBelongTogetherMarch and LUMOS are sharing a short video highlighting how institutionalisation dehumanises children. Video

The US Department of State 2018 Trafficking in Persons Report has included orphanages "Several orphanages, including in Oceania, Central America, and Eastern Europe, have been found in recent years to be doubling as brothels. In one instance, children of an orphanage as well as international NGOs reported detailed cases of staff forcing some of the girls, especially those from rural or indigenous communities, out at night to engage in commercial sex." ... " many orphanages use the children to raise funds by forcing them to perform shows for or interact and play with potential donors to encourage more donations. Orphanages have also kept children in poor health to elicit more sympathy and money from donors. Foreign travelers wishing to include a charitable element in their vacation often partake in “voluntourism” at orphanages, which child advocacy organizations and governments have documented as harmful. Volunteering in these facilities for short periods of time without appropriate training can cause further emotional stress and even a sense of abandonment for already vulnerable children with attachment issues affected by temporary and irregular experiences of safe relationships. (p.22)

And in Australia new legislation is tackling orphanage trafficking in travel company supply chains. The issue is included in the Modern Slavery Bill just being introduced into the  Australian federal parliament. The background to the campaign is here.

6. Overtourism: all around the world and reported widely in mainstream media

Overtourism is being widely written about in the mainstream media - less on the travel pages or in the trade press. There are further ideas for management interventions here.

Greg Dickinson in the Telegraph has written about tax as one strategy for reducing the pressure. 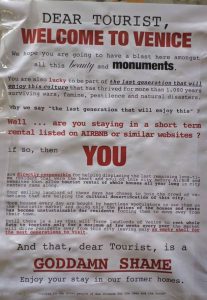 London is using a  mobile gaming app to help tackle overtourism. Play London With Mr. Bean is a free mobile app game that shows travellers different attractions around London that, when visited, earns the points to redeem for vouchers and discounts around the city. The idea is to disperse those visitors across the city to avoid congestion.
Iceland has struck back arguing that it does not have a problem with overtourism. Inga Hlin Palsdottir, director of Visit Iceland and Creative Industries, Promote Iceland spoke at Skift Forum Europe in April. "We have 95% of tourists who say they are satisfied with their trips, said Palsdottir. “Ninety percent say they are going to come back. Ninety percent of Icelanders say they’re positive towards tourism and the industry itself but 70% say they’re worried about the impact on nature.”

In Barcelona councillors in Ciutat Vella "... see immigration as having a positive impact – people have integrated well,” Santi Ibarra argues that the diversity that comes with immigration enhances the city – but tourism contributes nothing positive. “Tourism takes something out of neighbourhoods,” he says. “It makes them more banal – the same as everywhere else.” Stephen Burgen writing in The Guardian, 'Tourists go home, refugees welcome': why Barcelona chose migrants over visitors,' concludes "In Barcelona especially, immigrants are seen as part of the fabric – working, building communities, and generally making a contribution to the city while tourists simply use it. “The image of the city that the people themselves have projected is of a place of welcome,” says López of the ease with which new immigrants integrate in Barcelona. But – at least for the foreseeable future – tourists can expect a different reception." More

7. Progress on Plastic?
Last month we reported that Responsible Travel has produced a plastics free holiday guide and is offering no single-use plastic holidays. “For a trip to appear in our ‘No single-use plastic’ section you must not find

single-use plastic in the room in your accommodation, on transport organised by the tour operator or restaurants included in the itinerary. Same goes for organised activities. Now Travel Without Plastic  has been established to address the uncertainty that many hoteliers have when it comes to reducing or eliminating single-use plastics whilst still meeting the health, safety and quality expectations of tour operators and guests, in addition to being confident that the alternatives aren't going to have an even bigger negative impact on the environment. Their ambition is t prevent one billion single-use plastic items from entering the global waste stream by 2020.

8. The three most dangerous narratives in conservation
"We are a storytelling species, and people find it easy to understand and get behind a compelling story with strong internal logic and a beginning, middle and end."  Chris Sandbrook has blogged about three dangerous narratives in conservation If you care about conservation you need to read Chris's blog. Here
1. It is not the case that the “decision makers only care about money”. We have generated payments for ecosystem services, carbon taxes, biodiversity offset markets. Personal and emotional connections matter too and often matter more.
2. By casting conservation as a partner in the development we accept the inevitability of biodiversity loss, that's where the  “it would have happened anyway” narrative leads.
3. Foreclosing alternative ways of thinking ..... over land-use priorities and the dominance of the economic motive.