If you have suggestions for topics for the WTM RT programme at any of the four shows or suggestions for panellists who have evidence of real success in reducing carbon, water or waste please email harold@haroldgoodwin.info 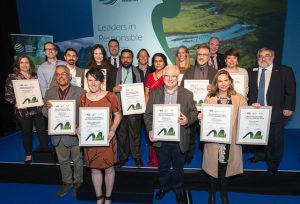 These awards are a centrepiece of WTM Responsible Tourism Day – the "biggest and best" Responsible Tourism event globally,  We are looking for practices and initiatives that will inspire others and that are replicable across the industry. Our ambition is to showcase great examples of Responsible Tourism in practice and to sue them to educate others, including consumers, about what can be achieved and to challenge others to do as well or better. We recognise that achieving sustainability requires both innovation and the application of the best practices across the business or destination. We are also keen to see businesses which can report their initiatives and document their impact, both increasing positive economic, social and environmental impacts and by reducing negatives ones. The 2019 Awards open in March.

The Overall Winner this year was Barcelona for its leadership in recognising and tackling Overtourism. To be a finalist in the World Responsible Tourism Awards is itself a major achievement. This year there were five categories and 18 finalists, 8 Golds, 5 Silvers and 5 "ones to watch" exciting initiatives which the judges recognised to have great potential.  Full details of the finalists and the judges' reasons.

Orphanage trafficking recognised as modern slavery By Australia a world first for a national government. Save the Children Australia’s child protection advocate Karen Flanagan explains: "We know children around the world are being exploited and removed from their families to feed the rising demand for orphanage tourism, even though the majority of these children have parents or family." Research has shown that children who grow up in orphanages experience attachment disorders, developmental delays and have difficulty in forming relationships in adulthood. ReThink Orphanages won the silver award at the World Responsible Tourism Awards, "Best for Communicating Responsible Tourism". more
TUI was the first major company to recognise the problem of child trafficking in orphanages and to add orphanages to their modern slavery statement. More

At WTM London in November there was a panel on animal welfare Video which included the results of World Animal Protection funded research by Professor Xavier Font. Font reviewed 62 trade associations and found that only six were communicating anything about animal welfare to their members and that only two associations and one tourism standard-setting body had welfare guidelines as part of their sustainability programmes. These three were ABTA (UK’s largest travel association), the Dutch Association of Travel Agents and Tour Operators (ANVR) and Global Sustainable Tourism Council (GSTC). Only ANVR, is doing any monitoring of its members to check if they implement guidelines or not. No less than 16 associations in both their literature and on their websites featured promotional pictures of wild animals, in many cases being cruelly used to interact with, and entertain,  tourists. More

4. Greenhouse gas pollution is still growing - the sector needs to do much more

The next generation may never see the glory of coral reefs as sea temperatures rise. The IPCFC is reporting that major economies, including the US and the EU, are not fulfilling their pledges. We are well off track. The global average temperature for the first 10 months of 2018 was 0.98C above the levels of 1850-1900, according to five independently maintained global data sets. The IPCC stated last month that to keep to the 1.5C goal, governments would have to slash emissions of greenhouse gases by 45% by 2030. Speaking at the opening ceremony of United Nations-sponsored climate talks in Katowice, Poland the naturalist Sir David Attenborough has said climate change is humanity's greatest threat in thousands of years. "If we don't take action, the collapse of our civilisations and the extinction of much of the natural world is on the horizon." More

For the four WTM shows in 2019 we are looking for businesses which can demonstrate real reductions in greenhouse gas emissions email harold@haroldgoodwin.info

5. Kerala recognised for its RT work and extends its programme 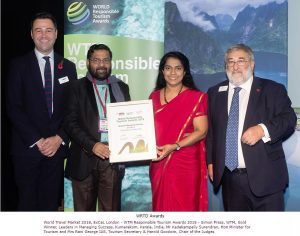 "What sets Kerala apart is that as a destination Kerala looked at RT as a philosophy that everyone needed to embrace,” says Dr V Venu, Principal Secretary, Kerala Tourism, and the pioneering bureaucrat who introduced this as formal government policy. Its main tenet is the creation of better places to live in and better places for people to visit, combining in one stroke the goodness of development via tourism."  Jose Dominic of CGH Earth Hotels has pointed out that “The DNA of Kerala has been responsible tourism since the beginning. We are in a leadership position now and have received recognition in the category for economic benefit to the local community.” Rupesh Kumar, State Coordinator RT Mission and a man deserving of the laurels recalls a time when he was frustrated by the unethical and unscientific development that was taking place, prior to 2007. “We began an awareness campaign against such moves,” he says adding, “Kerala RT is no showcase activity. It is a real model that is touching people’s lives meaningfully.” Jose Dominic puts the success story in a nutshell. “The ‘red flag perception’ kept investors at bay from Kerala but small entrepreneurs and the government began highlighting the indigenous and the small. It became a feature of Kerala and it became world class. The credit goes to Kerala itself.”

6. My Green Butler - engaging the tourist 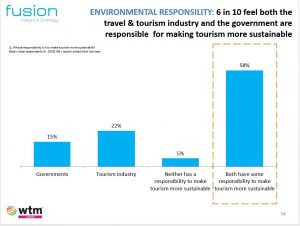 Dr Chris Warren conducted PhD research at Griffith University to determine how best to engage tourists to help hospitality become more sustainable and consequently invented My Green Butler. Engaging guests positively has the potential to save millions of kW of energy and litres of water without negatively affecting the guest’s stay. Warren has just secured a prestigious Banksia Sustainability Award in recognition of My Green Bulter's potential to make a difference in moving our society towards a more sustainable future.

7.  Overtourism: the focus shifts to solutions 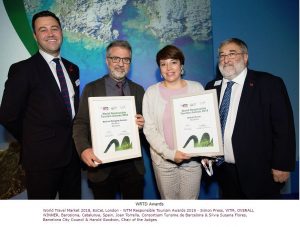 So many places are now recognising that they have a problem with overtourism that the focus is shifting to solutions. WTM, London research revealed that in a poll of more than 1,000 UK holidaymakers, well over half (57%) do not think tourists should have to pay such taxes. However, when asked if the UK should follow suit, almost half (45%) agreed that a tourism tax should be imposed on the 40 million annual overseas visitors who come to the British Isles.

In Goa there has been an outcry against a tourism master plan drawn up by international consultants. “Is it tourism for Goa or Goa for tourism? Is tourism for the benefit of people of Goa or Goa’s people are for tourism?" More In the Philipines Tourism Secretary Bernadette Romulo-Puyat has said the government has received complaints about the sorry state of La Union, Baguio, Puerto Galera, Coron and Siargao. Puyat said a “major thrust” was needed in all parts of the country to prevent violations of environmental ordinances and laws. "We also have to look past the pressure to just appeasing the present but rather to see to it that the future is even better."

The Vatican is considering placing limits on museum visitors, tour guides report that at least 10 visitors per day are fainting in the crowds queuing for the Sistine Chapel.  The Dutch are hitting back at the crowds visiting the World Heritage windmills at Kinderdijk near Rotterdam. It is not Disneyland.    In Dublin the City Council has set aside €400,000 to fund a task force to police potentially illegal Airbnb-style rentals. In Australia as many as one in seven rental homes in Australia’s most popular inner-city and beachside suburbs are being removed from the long-term rental market and listed on the short-term letting site, according to an Australian Housing and Urban Research Institute (AHURI) report that examined the effect of Airbnb in Sydney and Melbourne'. In Japan Kyoto is dispersing visitors spatially and temporally.

In New Zealand Stephen England-Hall, CEO of Tourism NZ, is arguing that “It’s more important to us to look after the overall needs and desires of New Zealanders than our visitors. We need to look at the risk of over tourism which is where visitor numbers can be overwhelming and that starts to create challenges for local residents or even problems for other visitors and tourism businesses. It's complicated, but what’s pretty powerful is that there's been a recognition by local government, central government and the tourism industry that we can learn and take a lot away from what's happening in other countries who have failed to take a proactive stance on this.”

At WTM, London leaders of tourism in four cities Amsterdam, Barcelona, London and New York were interviewed about the experience in their cities and about how they were managing it. The session is available to watch.

There is mounting concern about the decline in wildlife and biodiversity in protected landscapes in the UK. Weakening or undermining the existing protections or geographic scope is not part of this review, which is instead focusing on how designated areas can boost wildlife, support the recovery of natural habitats and connect more people with nature. The call for evidence closes on 18 December. Evidence received will form part of the designated landscapes review, which will report back next year with recommendations.

Pulau, the archipelago in the Pacific Ocean,  has announced that it is banning the import and sale of "reef-toxic"  sunscreens from 2020., under their  2018 Responsible Tourism Education Act. Hawaii in July banned the sale or distribution of sunscreen containing environmentally toxic chemicals. Hawaii's ban comes into force in 2021. Pulau has banned ten chemicals commonly found in sunscreen to protect lake life and corals. Palau's law also sets out that tour operators should provide customers with reusable alternatives to disposable plastic or polystyrene cups, plastic or polystyrene food containers, water bottles and drinking straws. These can either be reusable water dispenser and food containers or reusable individual containers or straws or "other means" .. not specified. More 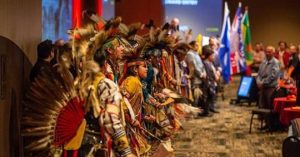