1. The Finalists in the 2017 WTM RT Awards have been announced

1. The Finalists in the 2017 WTM RT Awards have been announced

The 12 finalists now need to wait until the Awards ceremony at World Travel Market London on November 8th to discover who this year’s chosen leaders are. We shall, as usual, be publishing the judges’ reasons at the same time as the Awards are presented. The list of 2017 Finalists can be found here  and on the WTM blog site

There are 27 events over three days with the World Responsible Tourism Day. Wednesday 8th November, opening and Awards on the Global Stage. Sessions on the SDGs in the South Gallery on Wednesday afternoon and an agenda-setting session on the priorities for RT over the next five years in Platinum Suite 3 on Tuesday afternoon. Over all three days, there is a full programme in the new 100 seat Responsible Tourism Theatre on the show floor. Take a look at the programme here - you'll be spoilt for choice.  The RT Theatre is next to the Buyer's Lounge in the Africa Section

3.  What do you consider the major Responsible Tourism Issues?

The results of this online survey will be shared with the industry leaders when they are asked about their RT priorities at 13:00 on Tuesday in Platinum 3. We wanted your voice to be heard too.  Take part in the poll here - it will take less than 3 minutes of your time. 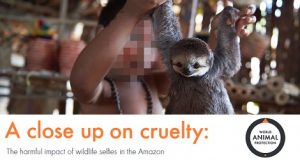 World Animal Protection’s new report, ‘A Close up on Cruelty: the harmful impact of wildlife selfies in the Amazon’ documents the world’s first complete review of wildlife tourist attractions offering close encounters with wild animals across Latin America.The report reveals the impact of animals being taken from the wild, driven by the growing trend of selfies on Instagram and other social media. The research shows a 292% increase in the number of wildlife selfies posted on Instagram since 2014.

World Animal Protection is calling on the governments to enforce the law and is working to ensure that travel companies and individuals abide by existing laws. Instagram is also being called on to implement and enforce a new animal cruelty policy in their Community Guidelines with specific focus on wild animal selfies. A Wildlife Selfie Code for tourists has also been launched. Web

5.  RT Speed Networking - register now to get a table.

The annual survey of 63 ships, conducted by the German environment group Nabu, refused to recommend a single one for adequately reducing its environmental impact in 2017. It accused the industry of having “contempt” for the health of its customers, saying companies had reneged on promises to clean up their fleets. “Last year the sector claimed 23 ships would be operating with soot filters,” said Nabu’s Dietmar Oeliger. “The truth is not a single filter is working at present.” more

The Ministry of Hotels and Tourism, the Myanmar Responsible Tourism Institute and UNICEF are working together to ensure that tourism does not pose threats to local children.  Authorities have instructed hotels and guesthouses to have notices warning that young Myanmar children cannot be brought into bedrooms.more   At WTM we have two sessions airing these issues. On  Tuesday we are looking at The Problem of Orphanages which often contain trafficked children (RT Theatre 11:45) and late in the day Human Rights: Trafficking and Modern Slavery (RT Theatre 15:15).

In October there are two conferences on overtourism and the problems of coping with success, the first in Iceland, the second in Dublin. At WTM London there are two panels in the RT Theatre. On Monday at 12:15 there is a session addressing the challenges faced by Arran, Orkney and Skye. And later the same day Martin Brackenbury will be interviewing  industry leaders from destinations and source markets, challenging them about what can be done to tackle the issues which success can lead to.

The collapse of Monarch Airlines leaves 750,000 future bookings cancelled and the UK's biggest peacetime repatriation flying home 110.000. British holidaymakers have been deterred from travelling abroad by the decline in the value of the £ since the Brexit vote. "The decline in sterling left Monarch paying £50m a year more for its fuel and aircraft – airlines’ biggest costs, paid for in the international market in dollars. Sterling has fallen 10% against dollar since the referendum and more than 12% against the euro." Terrorism played a part too, Monarch lost business to Sharm el-Sheikh and Tunisia in 2015. There has been speculation that uncertainties about the rights of UK carriers to fly into Europe post Brexit may have deterred buyers but there is also over-capacity in the market, in the short run good for passengers. more

10. Unique Youth-Led Walking Tours of Camden & Kings Cross and they'll be at WTM 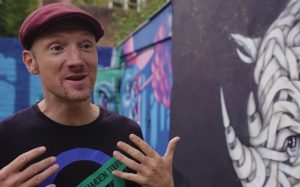 Guided tours by a young people's social enterprise: see street art in Camden Town or explore the new King's Cross. Discover a different side to London while supporting its youth. Our routes give you an insight into Camden’s recent history, a view of its street art landscape and musical history, whilst showing you iconic points of interest as well as the underground and alternative parts of Camden Town. Let them show you London through their eyes.

They will be at WTM on Tuesday at 10:30 in the RT Theatre in a Session on Slum Tourism where they will be alongside Reality Tours from India. There is a long tradition of what some describe as slumming it and others see as an attempt to see the world through the eyes of others. Should slum tourism be permitted? Is it a viable way to enable some of the poorest to benefit from this significant economic opportunity? If slum tourism is acceptable, how should it be organised and delivered? What does responsible slum tourism look like?