Responsible Tourism News is a newsletter of record carrying the 10 most important Responsible Tourism stories of the month. Please forward to those you think may be interested – you can subscribe  here. If you wish to contribute a story email harold@haroldgoodwin.info or post it on our RTNews Facebook page.

NASA has released its global temperature data for the month of May 2015. It was a scorching 0.71°C (1.3°F) above the long-term average. It is also the hottest first five months of any year ever recorded. As we look at climate patterns over the next year or so, it is likely that this year will set a new all-time record. In fact, as of now, 2015 is a whopping 0.1°C (0.17°F) hotter than last year, which itself was the hottest year on record. Read more

For the first time industrialised nations have declared that fossil fuel use needs to be ended. In Bavaria on June 8th Angela Merkel told reporters at the G7: “We are committed to the fact that during the course of the century we want to see the decarbonalization of the world economy” - not it needs to be made to mean something. Read more

The COP 21 Paris Conference on Climate Change  in December will test whether or not these words carry substance. At WTM in November World Responsible Tourism Day is challenging the travel & tourism industry on climate change and asking what more the industry can do to contribute to ensuring that we do not see a rise in average global temperature of more than 2 degrees.

2. Child Protection is a hot issue

In Cyprus child smugglers dressed as waiters are reported to have tired to snatch children at the Anastasia Beach Complex, near Protaras. Two arrests were made, Thomas Cook moved holidaymakers on request to another location and the families directly affected were flown home. Constant vigilance is required. Read more

Orphanages present perhaps a different challenge. As experience in Nepal demonstrates it is very difficult to be sure that any orphanage is free of child abuse or of so-called ‘false orphans’. These are children who have been trafficked to stock an orphanage (and thus elicit funds) despite having a family. Children are purchased, or their parents are persuaded that they will get a good education, when in fact they are used to stock orphanages, or beg on the streets, to make money for criminals. In efforts to address these problems, the Nepalese government has banned children from traveling without parents or approved guardians.

At WTM last November we discussed child protection, and how it is a challenge for the industry. The industry needs to avoid being used by all kinds of child abusers and ensure that we exercise our duty of care for our travellers, including children, and do what we can to avoid the sector’s facilities being used by those travelling abroad to abuse children. Video: Child Protection Debate WTM 2014

You can read the report of the 2014 WTM discussions on child protection here.

3. Reasons why you SHOULD VISIT NEPAL now

"Witnessing the amazing reconstruction of the Himalayan nation has now become one of the top cultural experiences. Combining faith, resilience and the work of expert artisans, who have been trained over centuries in traditional arts, Nepal is rebuilding itself quickly. It is certainly a rare opportunity to experience this anywhere in the world. Less than two months after the quakes hit, cultural icons like Boudhanath Stupa in Kathmandu have almost been completely restored." Read more  and here in the consumer press 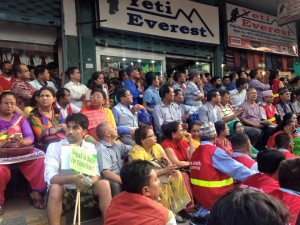 Nepal rallies  for tourism from Durbar Square to Thamel

According to Nepal Tourism Board (NTB), only 11 out of 75 districts, three out of 35 trekking routes, and three out of 19 National Parks and conservation areas have been affected by the earthquake. Similarly, only one of eight UNESCO World Heritage sites (cultural) is closed, and that there has been no damage in road network, highways and airports. Likewise, more than 90 percent of the hotels are safe and are in operation. More

We have a vision of an industry where all kinds of tourism, from niche to mainstream, are organised in a way that preserves, respects and benefits destinations and local people. Our Awards are a step towards this; celebrating tourism experiences that inspire and surprise travellers and the industry with what it is possible to achieve through responsible tourism. Responsible Tourism is about using tourism to make better places for people to live in and better places for people to visit, because great places to live in, with their natural and cultural heritage, are great places to visit. Available on line

5. Which Tourists should Overcrowded Destinations like Barcelona and Venice Keep

Barcelona's mayor-elect, Ada Colau Ballano, is looking at ways to stop the influx of visitors because, she thinks, it is in danger of becoming overrun and turning into little more than a theme park.

"When towns such as Barcelona are in danger of becoming victims of their own success, the best place to start is deciding which kind of tourists to keep. Both Barcelona and Venice are firmly on the cruise-ship circuit; perhaps a third of the visitors to the Catalan capital arrive on a large boat. For some cities, no doubt, they are an invaluable source of income. But for those perched at the brink of being overwhelmed, they seem like a good place to start the control. They are less valuable than other visitors because they don’t stay in hotels, and very often don’t even eat in restaurants. What is more, the vibe they give to a town is somewhat frantic. They, after all, arrive en masse with only a few hours to hoover up all the culture, architecture and shopping they can before moving on to the next stop on the itinerary. Perhaps it is time to initiate cruise control." Read Gulliver for more

6. Reason for Optimism about National Parks and AONBs in England?

“Our British landscapes are among the most beautiful and precious in the world. And such land remains central to the British imagination, to our souls and to our identity. .. We would miss such landscapes profoundly if they were gone. We have a deep obligation to protect this land, its farms and its communities.  ... This report also reminds us that safeguarding our countryside can also generate economic value, how our protected landscapes are increasingly rare in a rapidly developing world and just how precious they are to visitors and residents. However, while we celebrate the fact that they have also to potential to bring prosperity, we must never reduce such places simply to their economic value – they are so much more than that.”  Rory Stewart MP &  Parliamentary Under Secretary of State at the Department for Environment, Food & Rural Affairs (DEFRA)

"Carnival said fathom are to run these volunteer cruises every week from Miami to Amber Cove, Dominican Republic. You would have assumed they would have done it to Haiti seeing as though things are much worse there, and could do with a lot more help.

While on the ship the people will then undergo intensive training in volunteer activities, such as learning how to teach English, or to learn how to build water-filtration devices from clay.

Carnival Corp. has invested $85 million into this new project, and so is committed to helping people."  Read more

"Carnival is banking on its newest endeavor to lure passengers who might never before have considered cruising but are interested in vacations that combine volunteering with immersive travel experiences, a demographic that encompasses Millennials (those born between 1980 and 2000). According to fathom’s research, 80 percent of its cruisers will never have booked a Carnival Corp. cruise, and about half of those people will have never cruised at all. In an industry where 70 percent of people who cruise once will do so again, Carnival expects to turn those first-timers into lifelong fans." Read more   and more

There appears to be more detail on the commercial rationale than the volunteering. There are some important questions that Carnival needs to answer about its fathom programme.

Police report that a robust attitude to inappropriate behaviour in public, in the Cornish coastal of Newquay, has helped replace its “wild west” image as a haven for stag and hen parties with that of a family-friendly destination. Read more

The problem is not unique to Tanzania but the involvement of international organised crime has led to a decline of 60% in five years from 109,000 to 43,000.  In Mozambique a government-backed survey reports a 50% decline in elephant numbers. There is a serious risk that Africa may lose 20% of its elephants in the next 10 years and that the elephant will become locally extinct.

Wolfgang M. Neumann, President & CEO of Rezidor, is the new Chairman of the International Tourism Partnership (ITP).  He succeeds Ian Carter, President, Development, Architecture and Construction for Hilton Worldwide who steps down after four years.