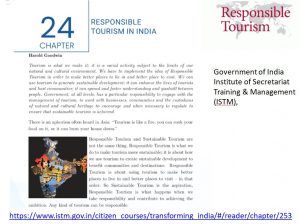 2. Aviation: Google & Hydrogen
3. Nature-positive tourism and zoos
4. TUI adopts Science Based Targets to reduce emissions
5. Is the age of cheap air travel over?
6. The "Big Issue" on aviation
7. Marine life in the Red Sea surveyed before coastal development
8. American Airlines orders "sons of Concorde"
9. How a vacation to Hawaii can be relaxing for tourists — and harmful to its residents
10. Miscellany

The 2022 World Responsible Tourism Awards are now closed. The Rest of the World regional Awards will be presented at WTM, London on November 7th. The Gold winners in each region, Africa, India and Latin America are automatically entered into the Global Awards presented at WTM London in November. Free to enter, we look for tried and tested solutions that work for destinations and businesses, solutions that make better places for people to live in and better places for people to visit – in that order.

You can find all those awarded this year here with the judges' reasons. It is another strong field with Kerala and Madhya Pradesh leading the way through RT MIssiosn which are bringing communities, government and the private sector together to make real change, making tourism better. The strength of the Responsible Tourism approach is now being nationally recognized and promoted - see for example: Goodwin H (2021) Responsible Tourism in India  Government of India Institute of Secretariat Training & Management (ISTM),

The BBC has revealed that Google has changed the way it reports emissions . "Google has airbrushed a huge chunk of the aviation industry's climate impacts from its pages," says Dr Doug Parr, chief scientist of Greenpeace.  With Google hosting nine out of every 10 online searches, this could have wide repercussions for people's travel decisions. Google now only reports on the CO2 emissions, omitting all the others that contribute to aviation's impact on climate change. Professor David Lee of Manchester Metropolitan University confirms that: "It now significantly understates the global impact of aviation on the climate" 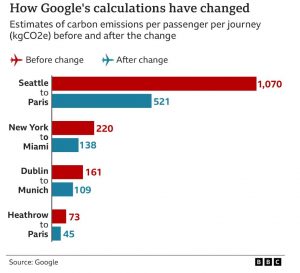 Meanwhile, Belgium is investing in hydrogen, according to the Belga news agency, 95 million euros have been made available for the construction of a hydrogen and CO2 pipeline network, and an annual budget of 25 million euros to support research and innovation has been allocated. 16 million euros will be used for the creation of a hydrogen expertise centre. Last October the federal government approved the Belgian strategy to make the country an import and transit hub for renewable hydrogen, to make greener the energy supply for heavy industry, which is responsible for 30% of CO2 emissions in Belgium. “To ensure that renewable hydrogen makes a real contribution in 2030, we need to start today,” said Tinne Van der Straeten, Minister of Energy.

In an opinion piece in the Independent, Justin Francis of Responsible Travel, has argued that "Most animals in zoos are not threatened or endangered and most zoos invest little in on-the-ground conservation – there are much better ways to experience wildlife." A 2021 report from the Born Free Foundation found that UK zoos invested, on average, just 6.6 per cent of takings in on-the-ground conservation projects.  Justin points out that tourism businesses they promote in places from Devon – where our local holiday partners have rewilded a barren horse farm into a 21-acre wildlife haven – to the Maasai Mara are demonstrating positive impact. As Justin reminds us, "We may not have rhinos here on our doorstep, but we do have red squirrels, golden and sea eagles, wild cats, bats and dolphins – and they’re vital too." Nature he argues needs to be made more inclusive and he points to the work of Black2Nature and Boots & Beards  "helping to make nature accessible to people who have felt excluded from the countryside."

Justin argues that "in many ways, tourism is ideally placed to contribute to the restoration of nature. We should be confident and ambitious in working to achieve this. The breadth of our relationships in destinations, and supply chains comprising accommodations, local activity providers, visitor attractions, transport services, nature reserves and food providers create opportunities for collaborations to deliver very significant change."

Animondial has adopted a nature-positive approach: " Halting and reversing damage to nature, so that the whole living world (biodiversity) can recover from its current depleted state. This involves both minimising ongoing harm and taking positive action to restore nature, to produce an overall benefit to biodiversity and help achieve Net Zero." 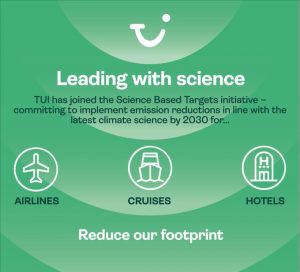 TUI is moving from offsetting to reducing emissions from its aircraft, cruise ships and hotels. The TUI Group is having its own reduction targets scientifically verified by the Science Based Targets initiative (SBTi) for validation. TUI expects to have these targets accredited by SBTi by the end of this year and that this process will confirm that TUI's 2030 emission reduction targets are based on the latest findings of climate science and are in line with the goals of the Paris Agreement.

5. Is the age of cheap air travel over?

Almost certainly.  Michael O'Leary, CEO of Ryan Air has repeatedly made it clear that  plane tickets will undoubtedly get more expensive since the low-cost business model is no longer sustainable. As Benedict Bradley, Thematic Analyst at GlobalData has argued

“Budget airlines such as Ryanair has enabled more and more people to travel abroad. However, the rising ticket prices will only compound the current cost-of-living crisis, and those already struggling could be priced out of the travel market. When it comes to the pressures on international travel, it appears that the cost-of-living crisis is going to pick up where the pandemic left off—with domestic travel numbers booming, but foreign travel under the pressure of hundreds of cancellations.

“While the price increase will be relatively insignificant for some, others will have to reconsider their holiday plans in the coming years. Weekend breaks abroad may become unfeasible as people pinch pennies to pay off sky-rocketing energy bills."

This may be good for the environment if people take fewer trips and stay longer, but it will exclude a bigger proportion of the world's population.

6.  The "Big Issue" on aviation
Airlines were invited to contribute their thoughts on reducing emissions for the government’s Jet Zero strategy. From saying people need to fly more to talks of levelling up. Sarah Wilson reported in the Big Issue what they had to say. The replies are embarrassing. Trade body Airlines UK said that any environmental initiatives which might make flying more expensive should be tested against “their impacts on economically disadvantaged areas of the UK”. Wizz Air said it believes that “an increase in unhindered demand should be encouraged as this provides the much-needed revenue for airlines to invest in extremely high-cost green alternatives like sustainable aviation fuel”. Sarah Wison comments: "So, they need an unhindered increase in demand for flights so they can pay for the measures to make those same flights climate-friendly."

Many airlines spoke in favour of providing passengers with information about the carbon intensity of their travel choices, including flying. While Jet2 said that making this a mandatory requirement for airlines to provide could enable “fair comparison between all airlines”, it added a key caveat: “This data must however have regard to commercial considerations, ensuring that competitiveness is not damaged by the sharing of this information and more detail on this type of approach would have to be considered prior to this being adopted.”

7.. Marine life in the Red Sea surveyed before coastal development
The Red Sea Development Company (TRSDC) has secured a baseline study of the habitats, flora and fauna along 200km of the Saudi Arabian coastline. "These include a significant number of endangered and critically-endangered species such as the Halavi Guitarfish, Hawksbill Sea Turtle and Sooty Falcon, as well as a thriving, eight-metre high single coral colony estimated to be around 600 years old." TRSDC CEO John Pagano said: “We want to prove to the world, and our peers in the tourism industry, that creating world-class destinations can go hand-in-hand with protecting and enhancing the environment."

“We’re challenging ourselves and others to do better and be better as global pioneers in responsible development and are issuing a call to action for tourism as an industry to step up when it comes to the impact on wildlife and biodiversity.” more  A baseline study is essential for any initiative which aims or claims to be regenerative.

8. American Airlines orders "sons of Concorde"
American Airlines is reported to be ordering 30 Overture 'son of Concorde' supersonic jets. Supersonic transatlantic flights are expected to carry passengers from 2029 on routes such as Miami to London and Los Angeles to Honolulu. Concorde was retired in 2003. Boom says that it will use sustainable aviation fuel to limit its carbon output. However, Supersonic travel is inefficient compared to subsonic flight because of the extra fuel needed for higher speeds. more  Overture is being designed to carry 65 to 80 passengers at Mach 1.7 over water — or twice the speed of today’s fastest commercial aircraft — with a range of 4,250 nautical miles. The Overture will have 65 to 88 seats, Concord had 100.

American is the third airline to place an order for the jets, after United Airlines which ordered 15 last year, and Virgin Atlantic, which reached a deal in 2016. Asked about the carbon footprint of such flights, a Boom spokesperson said the company prioritises “circularity by repurposing used tooling, recycling components on the shop floor, and leveraging additive manufacturing techniques that result in less manufacturing waste and lighter, more fuel-efficient products”. The company aims to achieve net zero carbon dioxide by 2025 and net zero greenhouse gas emissions by 2040, and says flights will fly on “up to 100% sustainable” aviation fuel. more

9. How a vacation to Hawaii can be relaxing for tourists — and harmful to its residents
Scottie Andrew, of CNN, interviewed  Kyle Kajihiro, a lecturer at the University of Hawaii at Mānoa and activist for the rights of Native Hawaiians. "....what’s profitable for Hawaii’s economy can negatively impact the lives of Native Hawaiians and yearlong residents. To combat drought conditions, residents last year were asked to reduce their water consumption or face a fine while large resorts continued to use far more water. There are millions more annual visitors than there are permanent residents — in 2021, there were more than 6.7 million visitors compared to 1.4 million residents — which can cause carbon emissions to surge and overuse of its beaches, hiking trails and other natural wonders. Hawaii has even been called the “extinction capital of the world” for the number of species who’ve gone extinct or are at high risk of dying out. more

“Detours: A Decolonial Guide to Hawai’i,” co-edited by Vernadette Gonzalez and Hōkūlani Aikau, is no ordinary guidebook: “Sometimes the best way to support decolonization and Kanaka ‘Ōiwi (Native Hawaiian) resurgence is to not come as a tourist to our home,” the editors write. Read more here

Responsible Tourism News is a newsletter of record carrying the 10 most important Responsible Tourism stories of the month. 5,000 people subscribe to receive it every month.  Please forward to those you think may be interested – you can subscribe using the box on the right if you wish to contribute a story email harold@haroldgoodwin.info

If you have any queries, please email harold@haroldgoodwin.info