The Market for RT

To help boost the visibility of more sustainable stay options, Booking.com is now showing third-party sustainability certifications and details on a range of 30+ impactful practices in place at hundreds of thousands of properties around the world, Press release  Full Report

Booking.com's 2020 report  was entitled: Impact awakening: the rise of responsible travel
Booking.com commissioned research conducted among a sample of adults who had travelled for business or leisure in the previous 12 months, and who were planning to travel in the next 12 months (if/once travel restrictions were lifted). In total, 20,934 respondents across 28 countries were polled in July 2020. 53% said that they were looking for more sustainable ways to travel, to avoid travelling during peak season (51%), overcrowding (48%) and overly busy tourist attractions (63%). More than half (53%) of global travellers said that they were willing to reduce their waste and recycle their plastic when travelling.  Agreement with the statement, I want to travel more sustainably because COVID-19 has opened my eyes to humans' impact on the environment, ranged from 74% in Colombia to 27% in the Netherlands. Agreement with I expect the travel industry to offer more sustainable travel options, ranged from 86% in Colombia to 47% in Denmark.

The Boston Consulting Group surveyed more than 3,000 people across eight countries in May 2020 and found that in the wake of the pandemic, people were more, not less, concerned about the environmental challenges and reported that they were more committed to changing their own behaviour to advance sustainability.  70% of respondents said they were more aware now than before COVID-19 that human activity threatens the climate and that degradation of the environment, in turn, threatens humans. More than two-thirds of respondents think that economic recovery plans should make environmental issues a priority. 40% reported that they intended to adopt more sustainable practices in the future [2]

IBM surveyed 14,000 consumers in nine countries. Not surprisingly, the survey found significant variations between countries, only 51 per cent of US consumers surveyed said addressing climate change was very, or extremely important to them, compared to 73 per cent of respondents from all other countries. On average 54 per cent of the consumers, IBM surveyed, said that they were willing to pay a premium for sustainable and/or environmentally responsible brands.[3]

August 2020 "new and evolving consumer segments to understand the changes people have undergone and the values they now hold." Accenture

Back at the beginning of the century we were more actively engaged in researching the demand side. Most in the industry now accept that the sustainability of the product, and the degree of responsibility exercised by those providing the package or the different elements of the holiday or trip, influence consumer choice.

2017 - major report by Booking.com on consumer demand for more sustainable tourism
"Even though only 5% of global travellers actually believe it is easy to travel sustainably, 46% of globally travellers consider themselves a sustainable traveller, with Italy, Germany and China seeing a rise in those identifying this way since last year but in markets like Australia, Brazil, Japan and the US there has been a fall (down 5%, 8%, 4% and 4% respectively). For  an overview of the top green/eco-friendly practices that global travellers are taking into account when considering a property to stay in read more

TUI has concluded, in its 2016 Better Holidays, Better World Report, published in March 2017, that more sustainable holidays are moving into the mainstream. 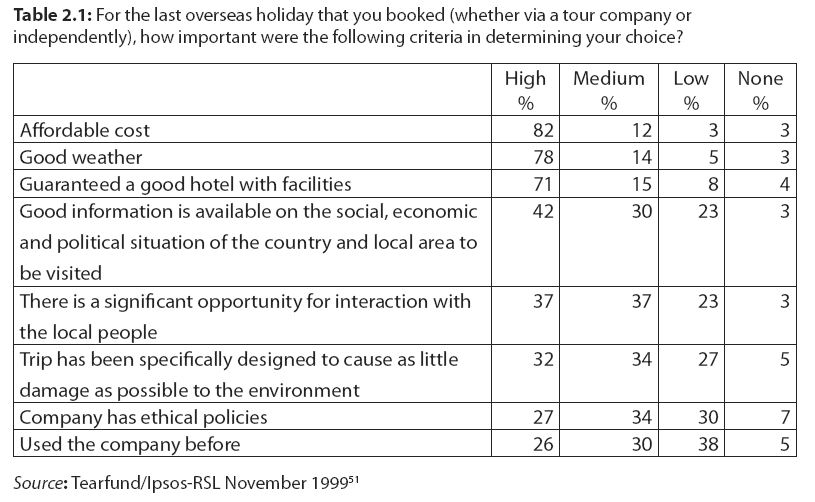 It is not surprising that a good hotel, an affordable price and good weather (this was a survey of British holidaymakers) were of the highest importance. However, the surprise was that the provision of good local information, a significant opportunity for interaction with local people and a trip was designed to cause limited environmental damage, were all rated as more important than whether the respondent had travelled with the company before. This group of holidaymakers is particularly important to a tour operator since the recruitment cost is low. Moreover, less than 5% of respondents reported in each case that these issues were of no importance to them.

A majority of consumers felt that it was the industry’s responsibility to provide them with more information about the people and places they were going to visit. Clearly, they saw the local people and their place as part of the experience they were purchasing. Perhaps most remarkably, 61% responded that it was important to them that the company had ‘ethical policies’; 27% of the sample said that it was of high importance to them. This was commercially sensitive market research: the point was not lost on the operators.

It may be objected that this market research measures and reports aspiration – upon which the respondents may not act. However, aspiration is a major element in most purchases. Most decisions about travel and the purchase of travel services are based on motivation (activity, destination or experience), opportunity (a function of available leisure time and cost) and a range of other factors which will include quality, safety, experience of and confidence in the provider and what might broadly be considered as ethical considerations. These are evident in the Tearfund research. The primary factors are motivation and opportunity, but, given the range of providers offering similar products at similar prices, the tie-breaker may be one of the ethical considerations, and particularly if these affect the quality and depth of the tourist experience." (Goodwin H 2011 pp58-59)

"The Tearfund/Ipsos-RSL research, in 1999 included the question ‘Would you be more likely to book a holiday with a company if they had a written code to guarantee good working conditions, protect the environment and support local charities in destinations?’ – 45% said yes, 13% said no and 42% said that it would make no difference. In 2001, the research was repeated, with the identical question asked by the same company, to a similar sample – 52% replied positively, an increase of 7% in two years.60 The research has not been repeated because it has become unnecessary."  (Goodwin H 2011 pp61-62)

There is little recent published research because it is now broadly accepted in the UK industry that sustainability is, for a significant majority of travellers, assumed; and that the industry must respond.

There is also a paucity of comparative research on the importance of sustainability in different source markets. The Canadian Tourism Commission undertook a major study of their source markets published in 1999.

"Research conducted by the Canadian Tourism Commission included for the first time in 2009 a standard question in large surveys of its 10 major source markets. They asked whether or not the interviewee agreed with the statement “I always take environmentally friendly tourism considerations into account when making a decision about where to travel to”. Accepting that this only records self-ascribed aspiration there are significant differences between representative samples in Canadian source markets – 88% of Mexicans, 68% of Chinese, 60% of Koreans and 56% of the French ascribe to this view of their decision making about holidays, compared with 33% of the Germans and Japanese, 31% of Americans, 30% of Canadians and 28% of Australians. The British came bottom: only 23% responded that they always take environmentally friendly characteristics into account when making destination choices. Responsible Tourism has been successful in the originating market which, amongst these eight markets, is the least predisposed to choose environmentally friendly options. Many will be tempted to dismiss the British experience as unrepresentative, but on the Canadian evidence, there are originating markets which look significantly more propitious for this approach. (Canadian Tourism Commission (2009))" Goodwin H (2016) Responsible Tourism Goodfellow pp.60-61

A survey by Booking.com of a minimum of 1,000 respondents who had travelled in 2016, and planned to travel in 2017, in each of 11 source markets reported that